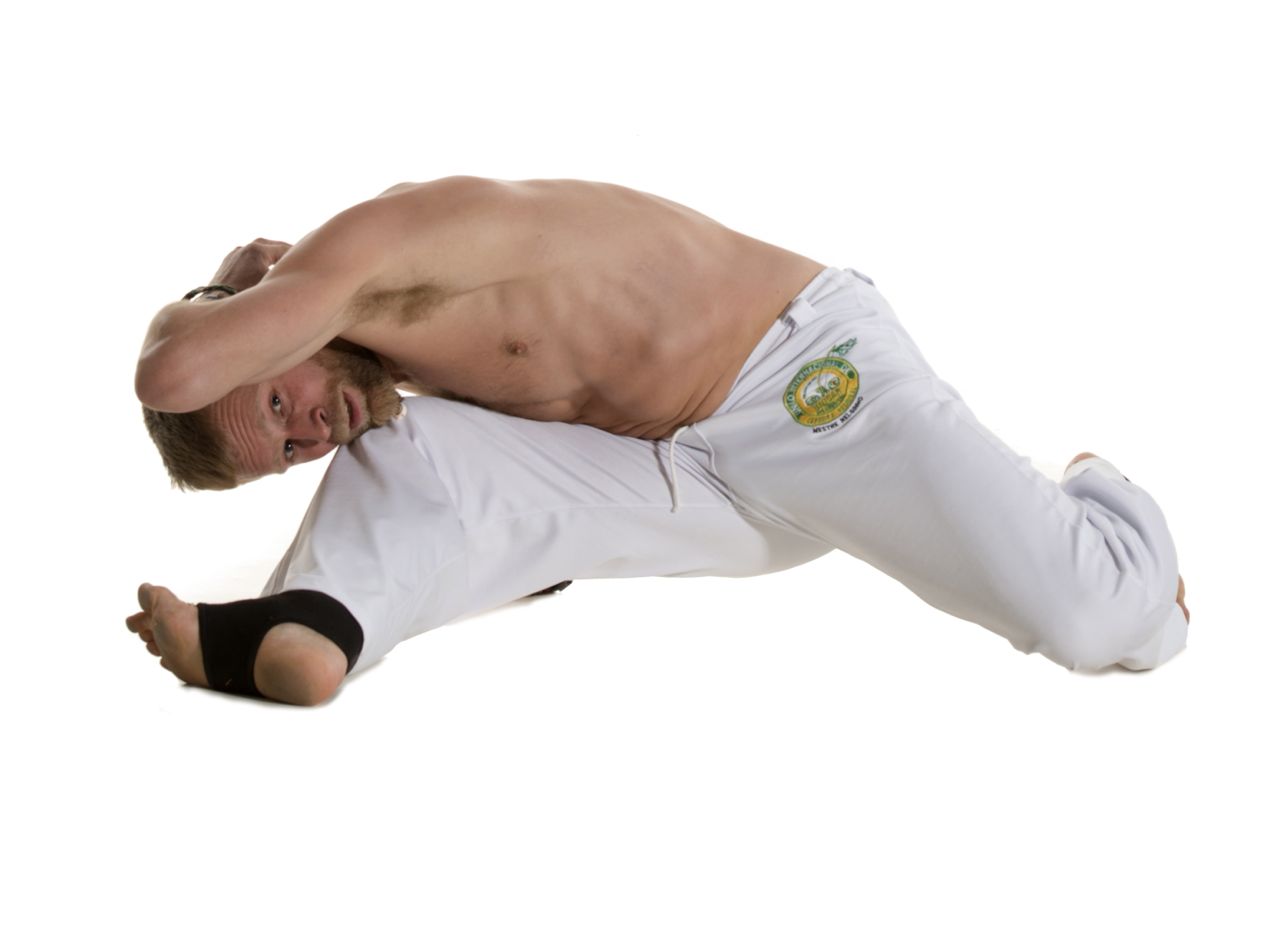 Capoeira is a martial art of African origin, but it has evolved to its present form in Brazil. The warrior arts that developed into capoeira were brought to Brazil by African slaves from places like Angola and Luanda. Slaves were forbidden to practice martial arts, so they disguised their fighting training as a festive dance-game which they played during gatherings and celebrations. During a celebration the people would sing and dance in a tight group and in the middle, where no onlookers from outside the group could see, the game of capoeira would commence. Accompanied by instrumental music, clapping and singing the capoeira players would use the protection of the group to hide their illegal fighting practice. The practice took the form of an acrobatic game of skill and cunning. Capoeira makes use of a constant flow of powerful kicks and defensive evasive movement (eskiva) and is an amazing workout, leading to great physical power, dexterity, flexibility and endurance. 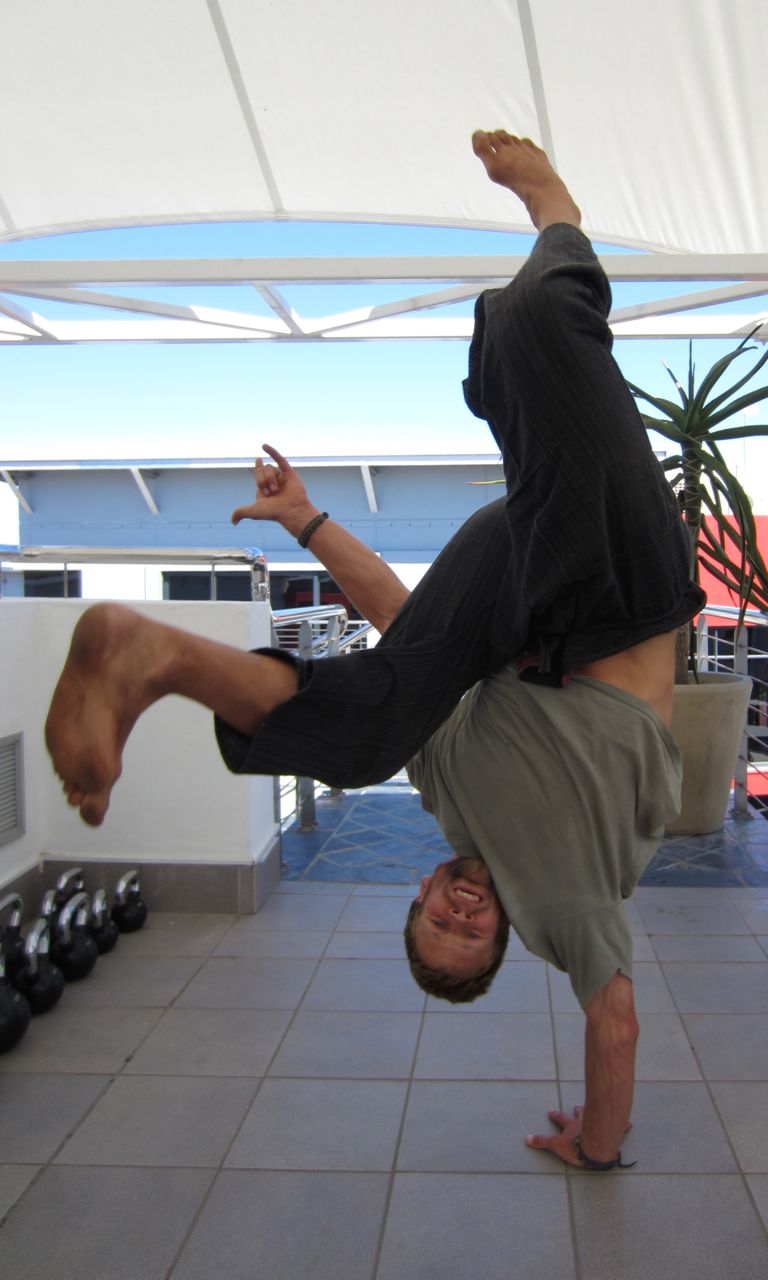 Capoeira today is still a very festive martial art. Capoeira players (capoeirista) gather around in a circle (rhoda), clapping hands and singing songs. They accompany the music with instruments like drums, rattles, tambourines and the birimbao, an instrument consisting of a bow and string, a calabash, stick and stone. The fighting or playing takes place inside the circle with the singers and musicians looking on. Two players squat down in front of the band, pay respects to the rhoda leader, greet each other and then move into the rhoda and play. The word Capoeira means chicken den and refers to the circle made by the onlookers at a cock fight. Capoeira is more than just two people playing, it is the whole event and every onlooker and musician is adding some part of the energy and spirit (axe) of the whole happening.

Capoeira is an original martial art and has many distinctive features which make it unique and a valuable addition to the world of martial arts. There is a light hearted, festive playfulness in the game but also an underlying sense of seriousness and cunning strategy (mallicia) which keeps the warrior's senses sharp. This paradoxical duality of playfulness and seriousness is one example of capoeira's cultural and spiritual heritage which has its roots in african spirituality (condomble). 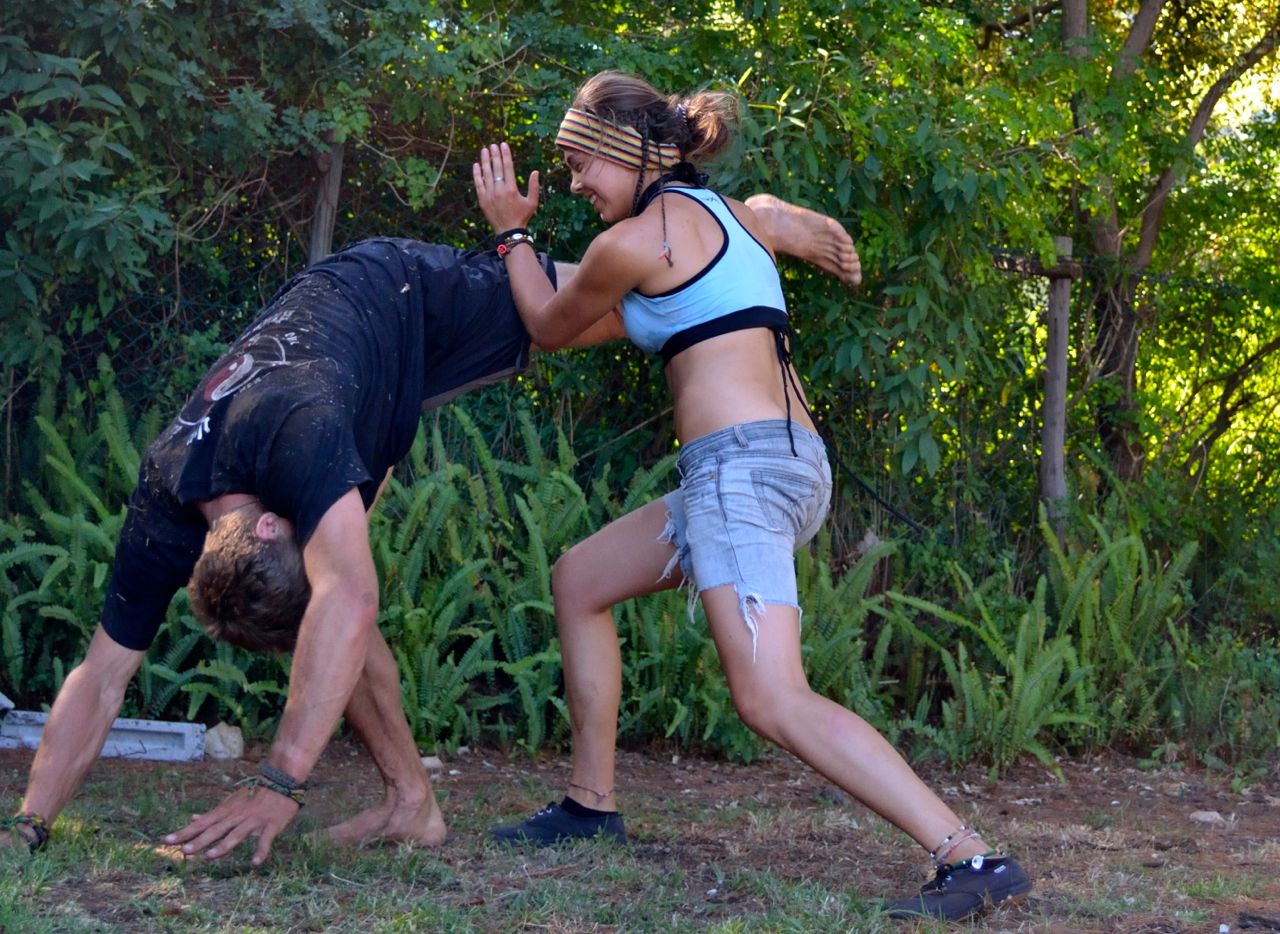 There are two main styles of Capoeira today- regional and angola. Angola is the older style. It uses slow monkey-like movements that are low down and close to the ground, kicks that are close and often make contact, and tripping and pushing. Regional was developed by the patriarch of modern Capoeira, Mestre Bimba. It is an upright style, making use of faster and bigger movements, tumbling acrobatics and powerful, fast kicks that are done at a safer distance than in the Angola style. It is sometimes said that the regional style is more for display and the angola style more for fighting, but this distinction depends on the individual practicing the art. In both angola and regional styles an interesting aspect of the game is the florero (flower). Florero's are flamboyant acrobatic movements that make a player vulnerable but are spectacular and serve to impress and amuse the crowd rather than serving a martial purpose. An expert player's purpose is to have such control of the playing space that he/she can perform florero's at will. 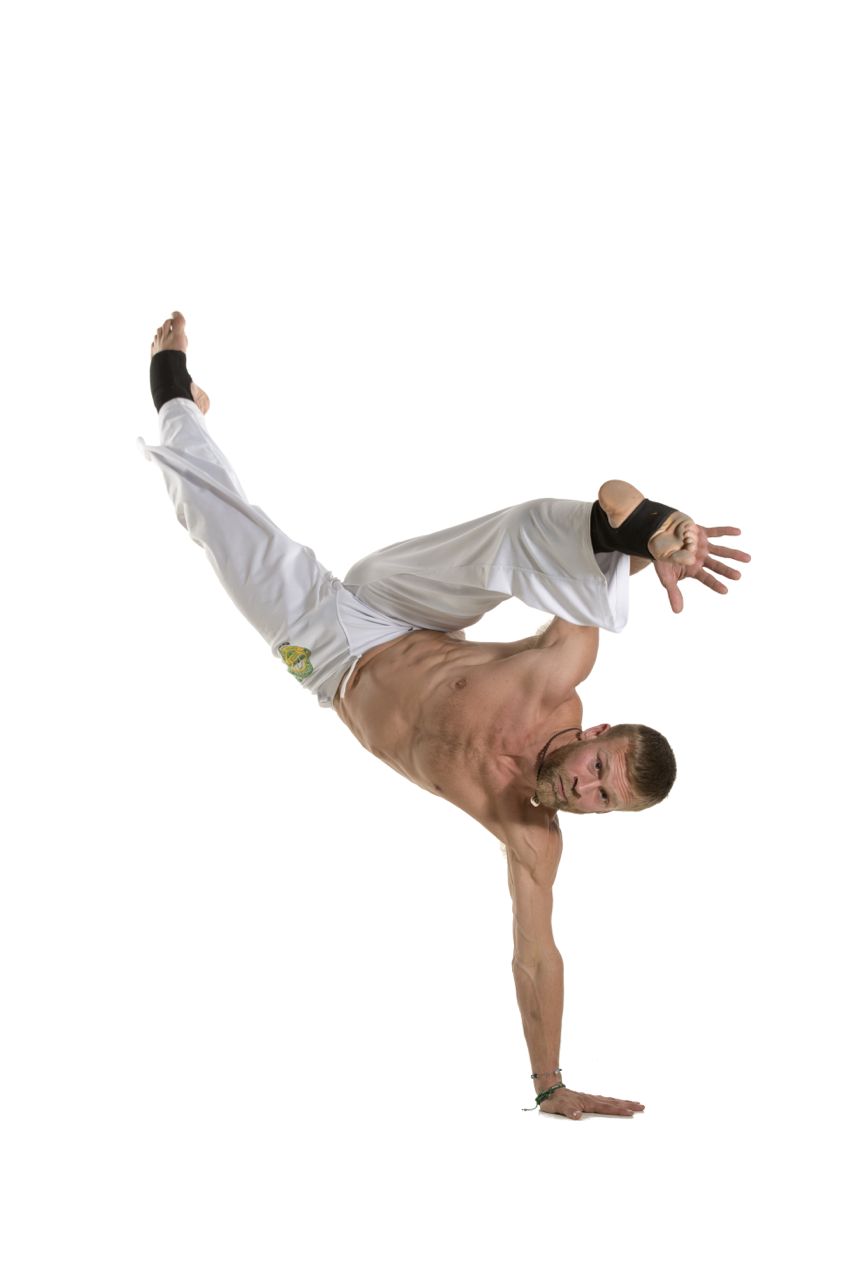 The freedom school approach is to give a student the necessary skills to be able to join the rhoda and play capoeira, no matter if it is angola or regional style.

Angola style is taught directly by playing a game where players are on hands and feet and the objective is to push the opponent over with one's feet, so that the opponent ends up on his behind.

Regional style can only be played once players have learned a few basic skills that are drilled in during practice sessions. These skills are:

Jinga - the basic capoeira dance step, a side to side swaying motion which acts as a launching pad for all possible capoeira techniques.

Ahu - the cartwheel. Cartwheeling is performed with players keeping eye contact throughout. When a player looses eye contact the connection is lost and the game is lost. The eyes make the difference between empty acrobatics and true capoeira. True capoeristas never let their attention waver from their opponents during a game.

Eskiva- Students learn how to perform evasive movements at any point during jinga or ahu. 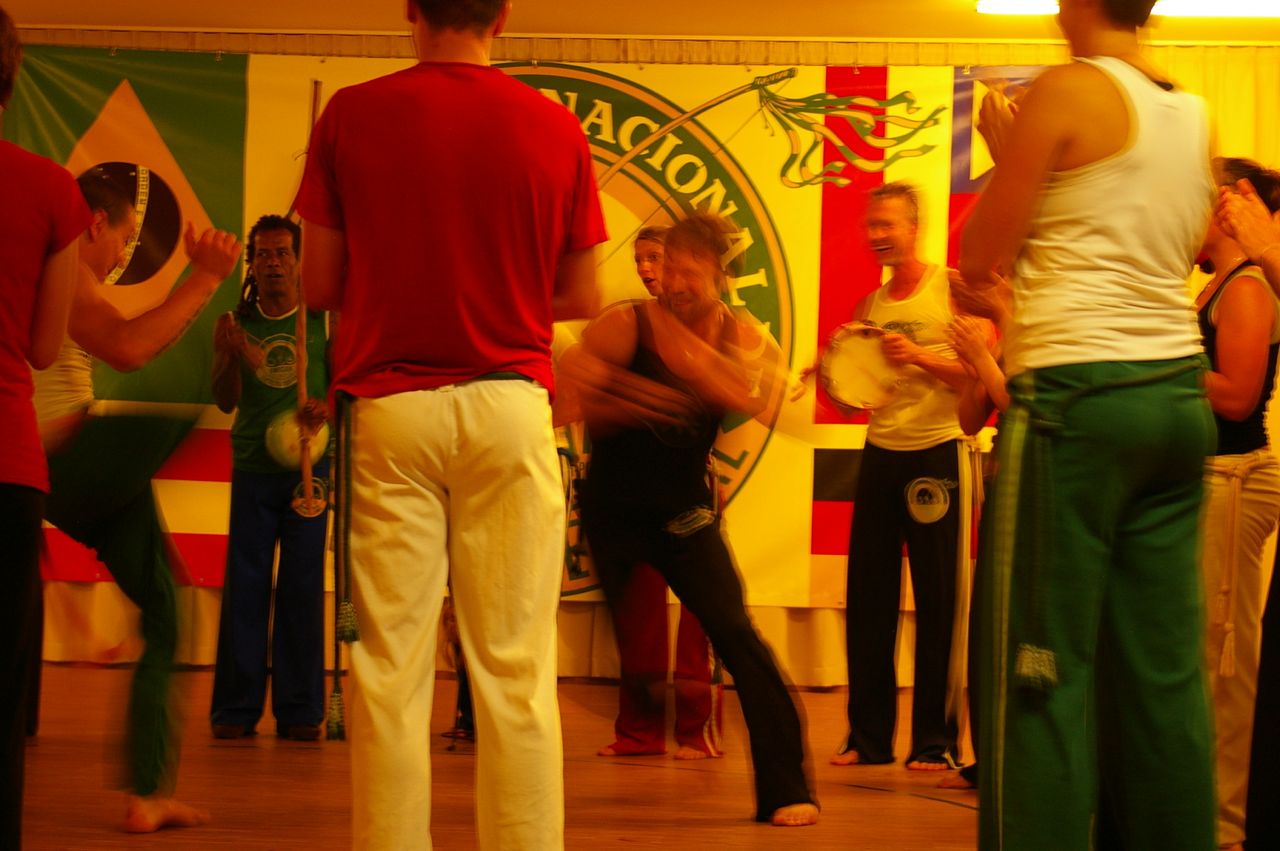 Florero's are not taught in Freedom School, these are up to the player to develop spontaneously. Players must earn their space to make florero's. There are many players these days who are more interested in doing tricks than playing a game. This is not true capoeira.

Rhoda- students learn the basic etiquette and customs of the rhoda and then they can play. It is through play that skill in capoeira develops. Students are given the tools to play and then they are free and in charge of their own progress and growth.