Martial Yoga (also known as Warrior Yoga) is a research into the yogic movements and principals found in martial arts, as well as a research into the aspect of the warrior found in the practice of yoga today. In ancient times yoga was the discipline of Vedic warriors and to this day aspects of warrior nature remain in yoga practice, both on the physical and spiritual level. 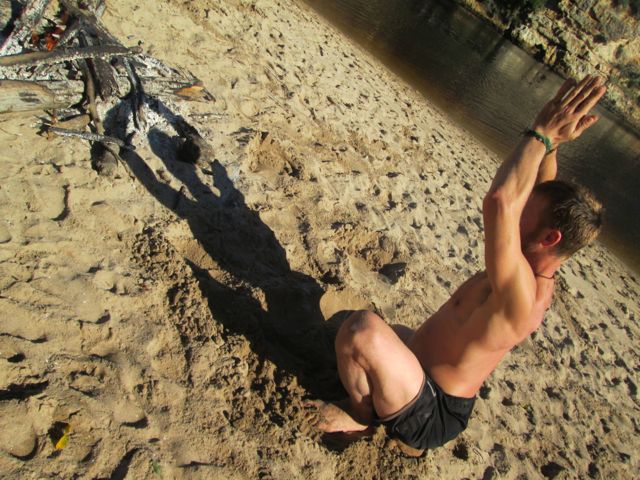 What is Yoga?
Yoga means "to unify" or "to bind together", and it can be said that yoga is any process that leads to unification within an individual. The word yoga has the same root as the word yoke in the english language. When oxen are yoked they are bound together to draw a cart in unison. In the same way the practice of yoga is a process of unification on many levels. On the physical level it means the unification of the physiological processes of the body - things that are disjointed are joined together, things that are misaligned are brought into alignment, and processes working against each other are brought into balance and harmony. Through the effort of training a yogi strives to unify his/her body. A body that is unified has the ability to be at its optimum power in action, and to be truly quiet at rest. The process of unification extends to many other levels, but in the end all levels become one, all becomes one. These other levels may include notions such as unity of body, mind and spirit, unity of consciousness with the present moment, unity of masculine and feminine energies, unity the human and the environment, unity of mankind and the universe, or of unity of mankind and the divine.

The Vedic discipline of yoga is an ancient root of most martial arts known today. The oldest martial art in the world is the Indian art called kalari payat, which is basically a pure expression of martial yoga. Kalari Payat or a related form of martial yoga extended into China through the buddhist monk Bodhidharma (5th/6th century CE), who founded both the disciplines of shaolin kung fu and zen (chan) buddhism. Both these disciplines were extremely influential in the evolution of the martial arts as they are known today.