This is a freedom School Quote

Hans Menck is the founder of Freedom Martial Art and Freedom Martial Yoga and is the head instructor of the Freedom School. His main base in Cape Town, South Africa, and travels regularly to teach.

Hans has permission from his masters to teach the arts that he is teaching. He also teaches an integration of all the arts. He created the Freedom School to impart his unique way of training and to create able training partners in this system. Through Freedom School he creates awareness and appreciation for global martial arts culture and the value systems contained within this culture. Hans  supports Freedom Martial Art study groups internationally while also building on the Freedom School HQ in South Africa and developing this website for international students. 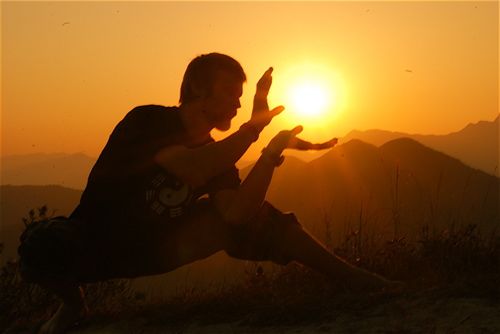 He started training judo at the age of 7, in 1980. At the age of 12 he changed to karate, which he practiced for 18 years, earning a 3rd dan in the kyokushin style.

In 1997 Hans graduated with a degree in Mechanical Engineering from the University of Stellenbosch. Since 1999 he worked as a design engineer in the automotive industry, traveling widely and training under many masters:

He studied Aikido in France under Christian Tissier Sensei, under whom he received his 3rd dan ranking. He also trained in Japan at the Aikikai Honbu dojo in Tokyo various times.

In Thailand he studied Muay Thai Buran under monk Kru Bah and Lai Leo (sword ways) under a Shan refugee from Burma, Adjan Jaa. Hans was the first (and perhaps the only) foreigner to learn the Shan art Lai Leo.

In Europe he also studied elements of Silat under Bruneian master Maul Mornie.

Over the last three years Hans has started to practise yoga in South Africa and he is integrating yoga and martial arts practise into Freedom Martial Yoga. This year Hans is building a dojo for the School in Pniel, Stellenbosch.