Karate-do: The Way of the Empty Hand 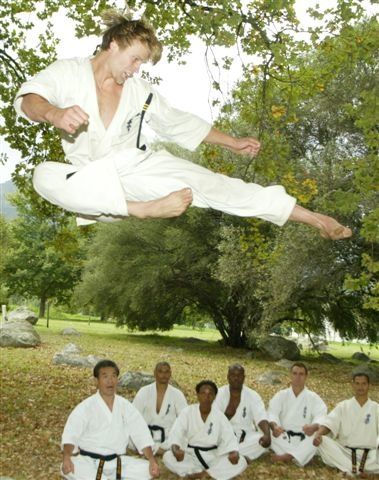 Karate is Japanese/Okinawan martial art specializing in kicks, strikes, blocks and body conditioning. Some schools of karate also practice throws, joint locks and vital point striking and traditional weapons (kobudo).
Karate is a ferocious martial art, hard in application. Training is hard and tough and emphasis is on development of external strength. Movements are hard, forceful and angular, but with many years of practice an element of softness and fluidity may arise for those who master its techniques. The basic philosophy of karate is to avoid violence at all costs, but when a fight is absolutely unavoidable knock the opponent down.

Today there are hundreds of styles and splinter groups in karate and some have become pure business, sport or watered down variations of the original arts.  But karate taught and practised correctly is primarily a martial way (Do) that teaches discipline, humility, courtesy and respect along with fighting skill. It fosters alertness, decisiveness, courage and self discipline.  A focal point of karate training is the development of a strong spirit- the ability to succeed through the force of will. Spirit leads the mind, the mind leads the body.

Training consists out of conditioning, kihon (basic techniques), kata (forms), bunkai (applications) and randori (free sparring). Kata is the core of karate training. Katas are prearranged strings of fighting techniques. They serve as a library containing the techniques and derivatives of a style. Bunkai is the application of the techniques in the katas, practised with a partner.
In modern karate, the relation between kata and bunkai are rarely understood and many schools teach kata mainly as aerobic exercise, or for competition and grading purposes.

Karate originated in Okinawa, an island between Japan and China.  Originally karate used to be know as te or ti and was an art reserved for the Okinawan royalty and their retainers, but it became increasingly influenced by chinese and southeast asian martial arts. In time it became know as china hand. Members of the Okinawan upper class were often sent to China to study various disciplines and they brought with them knowledge of chinese martial arts, most notably Fujian White Crane, the Five Ancestors and southern Shaolin systems.

Karate was also indirectly influenced by the Japanese Samurai martial arts (kenjitsu and jujitsu) because it developed in response to the invasion and occupation by Japan. Japanese influence in Okinawa started in 1609 with the invasion of the Satsuma Samurai Clan. Under occupation the Okinawan people, especially the peasants, were forbidden to carry weapons or to practice martial arts.  So karate was often developed and practiced in strict secrecy and the training was designed to help an unarmed peasant to deal with an armed and armored opponent. Training was often simple and basic, relying heavily on body conditioning and the development of a few effective techniques.  Karate was often a simplification of the complex chinese martial systems and it developed a flavor distinct from its chinese influences.

The karate kobudo weapons systems made use of sticks, oars, spades, rakes, hoes and other farming tools that could be carried by peasants. One famous karate fighter even used a wet towel to disarm a samurai warrior. The sai, tonfa, kama and nunchaku are all derivatives of farming tools.

In 1901 karate was introduced into Okinawas public schools by Itosu Anko. He created a regimental structure which proved to be very successful for training large groups, making it ideal for schools, the army and the professional teaching business. He structured and standardised the katas, creating the heihan and pinan kata series, to make it suitable for training in the schools.

In the 1920s karate was popularised in Japan primarily through the efforts of Gichin Funakoshi, who lay the foundations of modern karate. He introduced the white uniform (do-gi) and the belt and dan system into karate, which had been previously popularised by Jigoro Kanu, the founder of Judo.

The Freedom School approach to Karate

Freedom school karate is free of politics and the divisions of style. Sensei Hans Menck studied kyokushin karate, but has no problem with training with any other styles, such as Goju or Shotokan. Kyokushin literally means "the ultimate truth" and refers to the kind of truth that can only be discovered through real effort, challenge and direct experience. For this reason freedom school karate is still kyokushin, the search for truth, but not the fixed style and political organization of kyokushin karate, which has become fractionalized by politics and business interest.

The Freedom school approach to training is to research existing forms and techniques, to find the practical applications and internal body mechanics that make karate an effective and distinctive martial art. The emphasis is on training and research, and not on gradings, competition, political power and business interest. To ensure that karateka from various backgrounds can do sparring under similar conditions, Freedomstyle controlled flow sparring is used, to avoid injury while maximizing technical interaction.