The japanese martial art aikido is an adaption of the ancient samurai fighting arts - jujitsu (unarmed techniques) and kenjitsu (sword and weapons techniques). But where the samurai arts were designed for war, aikido was adapted for peaceful means, making it an ideal martial art for self defense, arrest, removal and non-violent conflict resolution. Aikido uses throws, joint locks, immobilizations , strikes and weapons techniques (sword, staff and knife) to deal with attacks by single or multiple attackers, either armed or unarmed. Aikido contains many interesting skills that have their origin in samurai body movement, such as seated and knee walking techniques (suwari wasa), break falling and rolling skill (ukemi), and the use of short staff (jo), sword (ken) and knife (tanto). 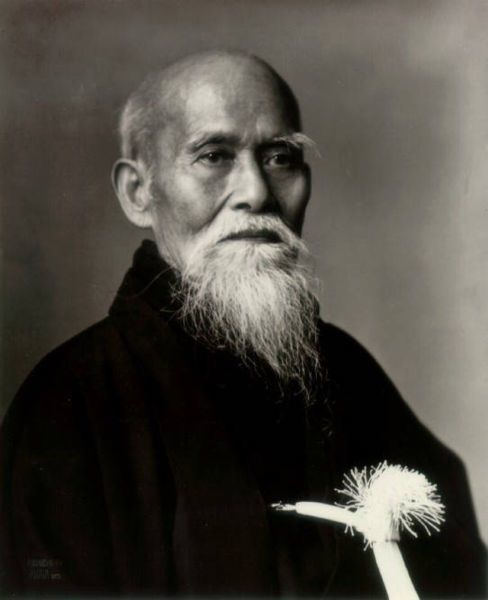 It is easier to meet violence with violence than it is to meet violence with skillful non-violent action. As such, non-violent aikido is a high level skill and it takes many years of practice to master its techniques. An Aikido practitioner strives to end a conflict without being injured or causing injury. The goal is not to win and beat an adversary, but to stop violence and to create harmony. Aikido strategy avoids head-on confrontation and a struggle of power, but rather seeks to use the energy of the attacker to unbalance, throw or lock down the attacker. The techniques of aikido do not work when two people are locked in combat and both attacking. But the techniques work well when a neutral defender is attacked by one or more attackers. The defender becomes the center toward which the attacking energy is directed and he/she utilizes  this attacking energy, to end the confrontation and create harmony. Hence the meaning of the word Aikido: the way (do) of energy (ki) in harmony (ai). Harmonious energy way. 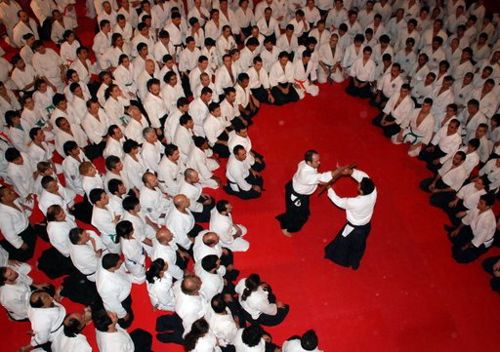 Traditionally, aikido practitioners (aikidoka) wear a white uniform (do-gi) with a white belt. Advanced aikidoka and teachers wear the dark robe-like pleated pants of the samurai (hakama) and a black belt if they have been graded to that level. Training takes place on a large matted area (tatami), but if no mats are available training can take place on any surface in a training hall (dojo). Holding true to samurai customs of respect and courtesy, an aikido class involves a lot of etiquette and bowing. One bows when one enters the dojo or steps on to the tatami, and when one engages with a new training partner. A class begins and ends with students lining up sitting on the knees and bowing  to pay respect to the founder, the teacher, and to commence or conclude training.

The bowing is followed by a warm up involving breath work , footwork, body conditioning, stretching, rolling and break-falling practice and sometimes weapons practice. Aikido involves a lot of throws and students need to learn break-falling techniques to prevent injury.

After the warm-up the main class involves the practice of defensive techniques. Students remain seated while the teacher demonstrates how to perform a technique and then students will pair up and take turns to practice the roll of attacker (uke) and defender (tori). The uke attacks tori with a strike or by grabbing on to tori, and tori performs an aikido technique that will either throw the uke or pin the uke down on the ground. If tori is attacked with a weapon the technique ends with the uke being disarmed. If tori uses a weapon to defend him/herself, the technique ends with uke being controlled by tori's weapon, unable to continue attacking. 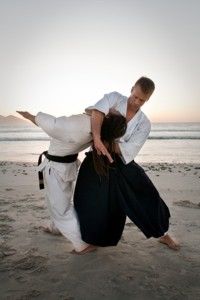 Students must first get a firm understanding of the jujitsu applications of the techniques and understand how to use the joints and levers of the body to make a technique work. Every technique has to work as a throw, and as an arrest and removal technique. The Freedom School approach is to understand the jujitsu level of practice before students move to the dynamic and energetic level of practice. Students are advised to have a basic understanding of general martial arts techniques when starting with aikido. Aikido as it is practiced commonly these days relies heavily on co-operation between attacker and defender to make the techniques seem to work. The Freedom School avoids the reliance on co-operation and encourages the uke to maintain the spirit of attack throughout the practice of a technique. An uke may not lie down for a tori out of courtesy but gives the tori as much adversity as he/she can handle. The techniques must work without co-operation.

Aikido was created in the period shortly before the second world war by the warrior-mystic Morihei Ueshiba (1883-1969). It was the synthesis of his martial training and also an expression of his personal philosophy of reconciliation and universal peace. Even though Aikido is a young martial art, it has its technical roots in the old school Samurai fighting arts (koryu) that were developed and refined for many centuries. Morihei Ueshiba studied many systems in his youth, such as sumo, judo, and various schools of kenjutsu (swordmanship) and jujitsu. His main martial teacher was Sokaku Takeda, who gave him full transmission in the art of daito ryu aiki-jujitsu, which he studied from 1915 until 1937.  The art of daito ryu is the primary technical influence on aikido. Aikido today seems like a stripped down version of the massive daito ryu syllabus, combined with non-violent intention and the possibility of spontaneous creation of techniques (takemusu).

Morihei Ueshiba was also a very religious man with a great interest in the main religious doctrines of his time (buddhism, taoism and shinto). His main religious influence was the neo-shintoist religion, Omoto-Kyo. He was very loyal to his teacher, the reverend Onisaburo Deguchi, and he was extremely disciplined in his religious practice which consisted of daily prayer, meditation and purification practices (misogi), such as cold water dousing. Morihei Ueshiba loved nature and got much of his physical power from training in the mountains, and from logging and farm work during his pioneering days in Hokkaido (1912).

In the period before and during the Second World War, Morihei Ueshiba distanced himself from his two teachers and started teaching his own martial art. He called it aiki-budo initially, but during the war it became known as Aikido. Morihei Ueshiba started calling his practice aikido after he had a mystical enlightenment experience by a well, during which he experienced a great golden light and could understand the language of birds. Through religious practice and through witnessing the horrors of war, Morihei Ueshiba developed a severe dislike of violence. He proposed to his students that aikido should be used as a vehicle for self-purification and for the creation of consciousness, peace and harmony on earth. 

"Treat your attacker like a baby, prevent him from hurting himself." -Morihei Ueshiba